It's resolution time again.  In years past I've resolved to abstain from certain things (e.g. french fries in 2008, carbonated soft drinks in 2009).  2010 was supposed to be the year of poetry, posted here at ES.  That went fairly well but when quality began suffering for the sake of quantity, I cut it short at 6 months to focus on other projects.

Over the last year, doodling has become a hobby, particularly during scheduling meetings at work.  The bulletin board in my office has amassed a number of oddball sketches.  They seem to get better, the more I do it, so I'm going to make a resolve to attempt a drawing a day.  We'll shoot for 6 months, initially.

I like to imagine being able to draw with the warm simplicity of Edward Monkton, the abstract mysticism of Salvador Dali, explosive poignancy of Ralph Steadman, and within as many dimensions as M.C. Escher.  As you can tell from my first sketch of the year below, I'm barely channeling a thumbless third grader.  That said, a number of folks at the office have found my oddball doodles entertaining-  I hope you enjoy them! 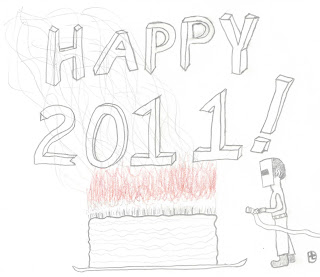 Lessons Learned:  Pencil isn't the best medium for scanning, but Gimp does a good job of blurring the grainy resolution.  And it's really 2011, not 201 1.
Posted by Daniel at 9:53 PM